I signed the Change.org petition calling for members of the Electoral College to not elect Donald Trump president. It may seem a folly, as much a folly as the recount called for by Green Party candidate Jill Stein in the states of Wisconsin, Michigan, and Pennsylvania. Indeed, voices I respect have argued against an Electoral College upset and the recount.

What would happen if somehow Hillary Clinton ended up getting elected president by the Electoral College? Easy: chaos. Folks will riot. Hoards of Trump supporters will likely up their terror campaigns against Muslims, blacks, Latinos, LGBTQ folks, immigrants, Sikhs, and other populations they target as enemies of their hegemony.

Then there would be political chaos. Trump would lose his shit and file lawsuits left, right, and center. That I could care less about, except that it may gum up the works and prevent Clinton from actually taking the oath of office and assuming the presidency. But assuming that Clinton got into the Oval Office, she would face investigations and obstructionism up the wazoo. The Republican Congress wouldn’t let her do jack shit nothing. Indeed, they would likely begin impeachment hearings on January 21. Yes, I know it’s a Saturday, but that wouldn’t stop them. The Republican Congress has been the laziest in history, but they’ll find plenty of energy to do something they really want to do.

Senate Majority Leader Mitch McConnell has proven well versed in the art of stopping a president. He (illegally in my mind) prevented President Obama’s final Supreme Court pick to receive a single vote, claiming that President Obama was a lame duck, in February, nearly a year before he actually left office. Bullshit, of course, but it worked. McConnell would have no problem whatsoever just a-sittin’ and a-rockin’ and doing nothing for four years to keep Clinton from governing.

So, alright, chaos. Pure chaos. That’s what would happen if the Electoral College elected Mrs. Clinton over Mr. Trump. For me, then, the question becomes, which chaos is the lesser of two evils: the Electoral College chaos or the Trump presidency chaos. Before answering that, let’s dispel a few myths.

As we know, Mrs. Clinton won the popular vote by over 2.5 million. This margin makes her the presidential candidate with the most number of popular votes to lose in history. The next closest is Al Gore, who lost the election but won the popular vote by 543,816 votes. Trump wants the world to believe that millions of people voted illegally, hence the high vote count for his opponent. Bluster bullshit. Nothing supports this claim. But watch this bluster turn into dangerous policy under the Trump Administration. With the help of Messrs. McConnell and Ryan, President Trump will forge the most restrictive voting rights rules in history. None will prevent non-existent voter fraud; they will instead make it harder for people they don’t like (minorities, liberals/progressives) to vote.

Many have called Trump’s election a referendum for white blue-collar workers. They cite his sweep of so-called Rust Belt states as evidence for this. True, he carried Ohio, Pennsylvania, even Michigan, all states that President Obama carried in 2008 and 2012. But lets look at those popular vote numbers again. (Data compiled from Wikipedia.) 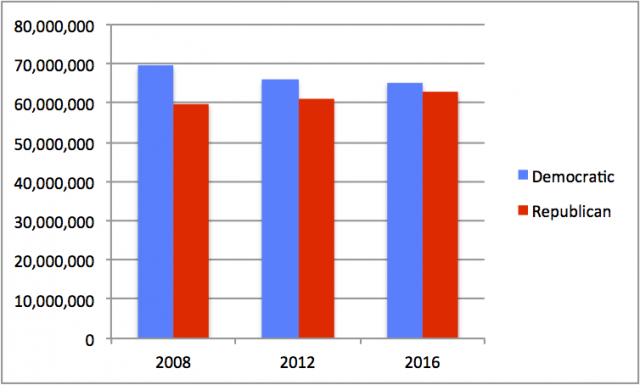 Bottom line, Trump does not have a mandate by any stretch of the imagination. He and his Republican lackeys will continue to push that myth, but it remains a myth. The country is not only divided between conservative and liberal ideologies, it’s also divided between the interested and the disinterested, those who bother to vote, and those who do not. We should ask those who did not vote why they chose not to. We should also find out if they tried to vote but could not successfully navigate new voter ID laws in states like Wisconsin.

Back to the main question, then, which evil should we endure. I vote for the Electoral College upset. Trump has already demonstrated how dangerous a leader he will be. He has appointed Steve Bannon, a dangerous, racist demagogue, to his administration. He refuses to divest himself fully from his businesses, setting up the mother of all conflicts of interest. His lack of experience led him to cause a diplomatic kerfuffle with China. All this, and he hasn’t taken the oath yet. And he continues to treat the presidency like a popularity contest and tweets about things that piss him off. Presidents don’t need to do that. He’s not Kanye West. Presidents should not tweet random thoughts that send the world into a tailspin, 140 characters at a time.

No, there is no question in my mind that the chaos of an upset in the Electoral College would be nothing compared the chaos caused by the presidency of someone so emotionally unhinged. That he’s unhinged should come as a surprise to no one. After all, he began his campaign with blatant bigotry (They’re bringing drugs. They’re bringing crime. They’re rapists.)

The UK has an escape clause as well, though so far they refuse to take it. The Brexit referendum vote was not binding. Parliament can legally override it. They won’t, however, for fear that such a move will outrage the population, despite the buyer’s remorse. We’re both in the same boat.

Having said all this, even if the Electoral College went rogue and elected Clinton, she likely would not accept the appointment, knowing all that she would face. Such an election may well offend her sensibilities, too, even though I’m sure she has concerns about a Trump presidency.

We need to retrain our sensibilities. Trump has unleashed America’s very ugly underbelly and made it mainstream. The KKK and other racists openly celebrate Trump’s victory, and he only tepidly distances himself from them. The media continues to normalize these fringe groups and their hate. And so-called mainstream Republican politicians like Ryan and McConnell, hungry for power, continue to support Trump despite the dangers he poses to our democracy and world affairs. Democrats have no choice but to adopt new strategies to avert the disasters this “new normal” pose to the nation, even if those strategies make them uncomfortable or go against their sensibilities.

Republicans have demonstrated that they have the will to do anything to get their way, including support an unqualified president. Democrats thus need to respond in kind.

Think of all the potential. #wordsonthestreet #se