Sorry, I know it’s been a few days. Haven’t been keeping up.

I’ve been watching Mad Max, the first time in a while. I guess I’ve watched it, I don’t know, four or five times a day. From the time I wake up to when the sun goes down and I lose power.

My viewing habits created these artificial “cliffhanger” days, where the power cut out before I finished. The next morning I’d take it up where I left off. It’s funny how I got myself all hyped up. I’d tease myself with, how will he get out of this one?

When you get crushed, you need something to hold onto. So I went for Mad Max. I guess part of me, my 20-something part, still hopes that he’ll come over the horizon, guns blazing, spitting don’t-take-no-shit attitude everywhere. Something, anything, to make it alright again.

But before I talk about the crushing, a brief weather update. Warm to hot.

The only reason I care was that I had predicted a about a week ago that a cold snap would hit and send the temps down to the 50s. Why would I predict such a foolish thing? Well, I saw a pattern of clouds in the sky that I hadn’t seen since my childhood. Back then, whenever this pattern came, it meant that rain or cold weather came right behind it. I knew better than to think there’d be rain. But I hoped for the cool weather.

I even got cocky enough to tell Larry and Sue about it. Larry horse-laughed, and Sue didn’t say much of anything. She just sort of stared into the sky at the clouds.

Then she muttered under her breath, it is winter.

Larry heard her and horse-laughed again.

And of course, the following morning I woke up just before sunrise, to see if my little prediction came true. It didn’t. 60°. Shit.

Larry crowed, Told ya! Told ya! Then he gleefully marked another note on his calendar. His father began counting the number of days that have passed since the last time the temp dropped below 60 in our area and Larry has continued the practice.

His wife hates it when he does that. It’s not a game, she yelled at him.

She thought about their kids and the world they’d be stuck with. She didn’t like his snark. But I mean, you know, seriously. I like Larry and Sue, but really, if you’re that concerned, then why did you have kids to begin with? And why three?

If they lived in a better area, like a Grade B zone, then they would have been thrown in jail for having so many offspring. But out here, they don’t give a shit. Patrols haven’t come through here in a long, long while.

Which brings me to the crushing:

Municipal came through a few days after my weather fail and stuck notices on our door. They did it at night, so they didn’t have to talk to anyone. Here’s the notice: 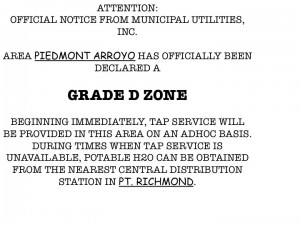 They never explain why an area goes from bad to worse. It just happens.

Larry stopped snarking. His face turned grey and dusty, like he dead soil in our region. Sue became the snark. Why don’t cha tell us how many days now? Huh? Why don’t cha?

Larry never responded. Never said much of anything, really. Eventually, they just up and left one night. They didn’t even say goodbye. But then, most don’t. They just leave.

I remember when this area when from B Grade to C Grade. Lots of folks left. They wanted their daily tap service, not some weekly shit. This one lady went on about the sanctity of her daily showers.

And now it’s happening again. I suppose Larry, Sue, and most everyone else leaving will try their luck migrating to a B Grade or even a C Grade area. Good luck to them.

Me? I sick of moving. I’ve been here for over 20 years, making me the old homesteader of these parts. When I plopped my ass here, I said that I wasn’t moving it again, except into the grave. I’m still saying that.

Pt. Richmond is 18 miles away. My car’s batteries stopped taking a charge ages ago. And I don’t have a bike.

I should have gone to the distribution center days ago, but instead I’ve been farting around, watching Mad Max day in and day out.

But now I’m running low on the wet, so unless I’m ready to call it the day, I guess I better get my ass in gear.

I’ve heard about those distribution centers. Heard about how they treat you there. How they hoard the wet stuff from you, accuse you of taking more than your share. Officials always treat you with suspicion, my great-granddad used to say. Don’t trust them.