From Digby via blue aardvark on Daily Kos: 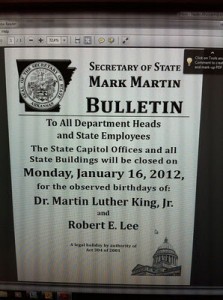 Since 1986, the US has observed the birthday of Dr. Martin Luther King, Jr. on the third Monday of January, which typically falls within a few days of his actual birthday, January 15.  All 50 states first observed the holiday in 2000.  But in the good state of Arkansas, where Mark Martin is Secretary of State, they do a two for one, celebrating the birthdays of Dr. King  and Confederate General Robert E. Lee, who was born on January 19.

How egalitarian!  A tittle for tattle!  A yin for yang!  A white for black!

My parents were hip Negroes with a wry sense of humor, or the absurd.  They married on January 19, 1951, hence they referred to their wedding anniversary as Robert E. Lee Day.  During the salad days of their marriage, I’m sure there were many locales south of the Mason-Dixon that celebrated the birthday of the Lee, a veteran in the “war between the states.”  Undoubtedly they had to read about it in the paper, see photos of parades, hear about the speeches, yada, yada.  An important day, indeed!  So why not name their wedding anniversary after Lee?  Why indeed.  But as I say, my parents, rest their souls, had a sense of the absurd.

Well, I’m a pretty hip Negro, too.  It says so on my birth certificate (the Negro part, anyway).  However, I don’t think I’m quite hip enough to understand the conflation between Dr. King and General Lee, at least in terms of equally celebrating their birthdays.  One worked tirelessly all of his shortened life to undo the harm caused by years of de facto slavery.  The other fought for “states’ rights” to maintain de jure slavery, even though Lee himself eventually felt that slavery was an evil and that its eradication was a good thing.  While Lee may well have experienced a conversion or may not have been that into slavery to begin with, the fact remains that when given the choice to fight for the Union or for Virginia as it seceded from the Union, he chose the latter.

The fact also remains that the main reason behind the Civil War continues to elude too many people.  Folks equivocate, vacillate, waver, or just plain ignore the issue.  Slavery remains the elephant in the room and year after year, a century and a half after the Civil War, this fact remains true.  Those who wish to redeem Robert E. Lee as a reformed person after the Civil War knowingly or unknowingly paper over the reasons for the war.  Thus, they see no problem or irony in celebrating Lee’s birthday in conjunction with Martin Luther King, Jr.’s.  But those of us who are paying attention see plenty of contradictions.