New York makes it legal.  What a sweet victory.  The thing that likely pushed it over the finished line was the “get out of jail free” card added to the bill that exempted religious institutes from having to conduct or condone same-sex unions in their hallowed halls against their will.  And I’m totally fine with that. During the brief time that same-sex marriage was legal here in California, there were plenty of religious institutes that were only too happy to host and bless the unions.  Those institutes that did not, didn’t.  There it is.

I’ve always said that in the eyes of the state, all marriages are civil unions, not religious ones.  The religious element is added by the marrying couple based on their own preferences and inclinations.  But the marriage license, the piece of paper that declares a couple is bound together legally and grants the couple oodles of rights and benefits, is an instrument of the state.  Churches, temples, and mosques do not issue them.  This is a good thing.  We live in a democracy, not a theocracy.  You know, that first amendment thing:

Congress shall make no law respecting an establishment of religion. . .

It’s been very frustrating to me that the religious aspect of marriage has overshadowed the debate about same-sex marriage, because the state, state and federal government, has no business discussing or promoting any religious dogma.  Government’s sole concern regarding gay marriage should be will it harm society.  Daily Kos posted this handy pie chart demonstrating just what effect same-sex marriage will have on the world: 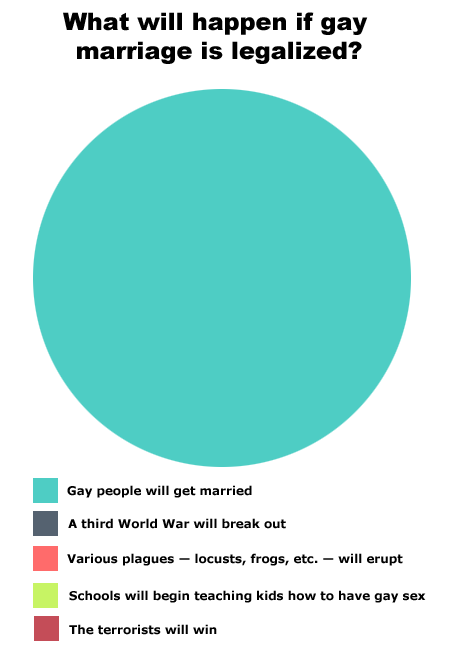 Six other jurisdictions have legalized same-sex marriage in the US before New York — Connecticut, Iowa, Massachusetts, New Hampshire, Vermont, and Washington D.C. — and in none of these areas did World War III or plagues erupt, schools start teaching how to have gay sex, or terrorists win.  It is doubtful that New York will be an exception to the trend.

Smart folks know all this.  Smart folks who understand how the law works and what the constitution says have figured this out already.  Governor Andrew Cuomo is smart.  He used his position as NY governor to spearhead this effort through the state legislature.  And in the process he and his colleagues convinced enough Republicans in the New York state senate, the Republican controlled New York state senate, to vote in favor of marriage equality.  That’s huge.

I would like to think that other smart folks will eventually rise to the level of their intelligence and stature and do the same thing.  To do so would be a demonstration of fierce advocacy.  Perhaps New York’s example will be an example for the rest of the country.